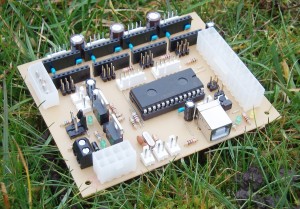 This is a RepRap controller board designed to be do-it-yourselfable. Replication is what makes RepRap unique, so this is extended to controllers here. All Gen7 PCBs can be manufactured on a RepRap, on a general CNC milling machine, etched with the toner transfer method, or they can even be bought.

The circuitry design is similar to other single/stacked board solutions like RAMPS or Sanguinololu. Generation 7 Electronics can drive the same hardware. Additionally, it comes with a few nice details to make it more reliable.

Note: Generation 7 Electronics is licensed under Creative Commons BY-NC-SA. You're free to make your copies of the hardware for personal use. If you want to purchase Gen7 components, please stick to the development supporting distribution channels. Thank you.

How to get it

See also the wiki pages of the individual boards.

As Gen7 is a single board solution, it consists of only few components:

Gen7 Board is the central unit. It can drive a RepRap machine on its own, but not much more. Full power to the basics, no expensive extra features.

Gen7 Endstop 1.3.1 is an optical endstop for controllers with 5 V signals (incompatible with Gen7 Board-ARM), made to fit on Mendels & Co.

Extension boards are what makes Gen7 powerful and feature rich. While the base board has only the essentials to get your printer running, you can add on this part later to enjoy all the goodies.

Here are a few extensions currently in development or already working: 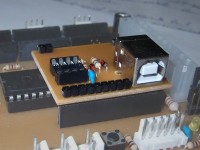 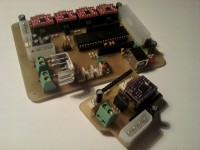 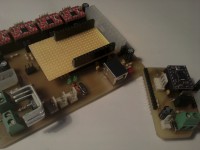 Xoan shows here how to design extension boards to allow stacking multiple ones. 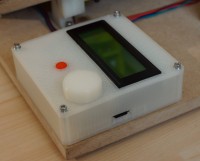 Gen7 ExtensionBoard LCD SD FAN by NightFly is an extension board with all the spiffy features people like: LCD, rotary encoder, fan connector, …

Besides the parts needed for the individual components, you need thin wires to get the thermistor and end-stop signals to the Board. For example, you can salvage the cables you find between a PC main board and the PC's hard disks or those from any fans, indicator lights and reset switches.

Heaters and stepper motors need a bit more current, so the wires should be thicker. It's a good idea to use cables from mains household appliances. These have typically 2x or 3x 0.75 mm2 (~18 AWG) wire multi conductor cables. Remove the outer insulation carefully, and then re-group them in sets of two or four, as needed; twisting the wires while doing so reduces electromagnetic influence and keeps them tidy. Label the ends if you do not have enough colours, a permanent marker can be used to add a stripe to both ends of a wire, this lets you use one colour twice (and keep pairs matched up).

For shorter links or intermediate currents, the coloured wires from salvaged PC power supplies are well suited, sometimes they have two thicknesses on one PSU, you can strip the ends and compare which ones are the most suitable, they come in a number of colours, black, red, yellow and orange are the most common.

As the wiring of the boards is slightly different for each released version, these details have been moved to the board's page.

Generation 7 Electronics isn't a device in the sense of European Community regulation 2004/108/EG (EMC Directive). The reasons include:

If you use a Gen7 to assemble something usable, check (at least) the following if you want to conform to said regulation:

If you buy and assemble an Generation 7 Electronics kit, you're manufacturer in the sense of the EMC Directive, not an end user. As long as you're developing and testing, most EMC regulations don't apply (for obvious reasons). The directive just wants you to protect devices of third parties from yours, so don't run a Gen7 right next to your neighbour's cardiac pacemaker. There's no time limit for developing and testing.

That said, this section mostly applies to all currently known RepRap electronics. Also, the said was written after investigation of relevant law texts by an mechanical engineer, not a lawyer. 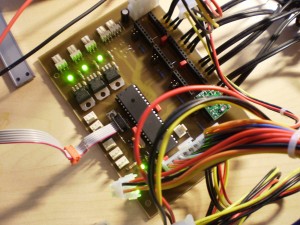 The very first working Generation 7 Electronics Board, created by Jacky2k.

The Forum thread (german), where everything started.

24.12.2010: A first version of the Gen7 board has been etched and is being tested. The hardware seems to work, but the software still needs to be ported and tested with a RepRap.

04.01.2011: We found some bugs in the firmware again. All of them seems to be fixed, release is planned tomorrow.

08.01.2011: Some little modifications of the PCB are required. Pull-up resistors for I²C are missing, we want to change some headers to more common one, some resistor values are missing, …

09.02.2011: The master branch of FiveD on Arduino firmware is ported and seems to work but is not tested 100%. The config file for the firmware will come soon.

New features: it works. Isn't that the most important thing on an 1.0 release?

This is a bugfix release.

Diego Soares tweaked the Generation 7 electronics design, swapping out some of the connectors and other parts for parts that are easier to find in Brazil, producing the Gen7BR.

generation_7_electronics.txt · Last modified: 2018/05/29 00:50 (external edit)
Except where noted, content of this wiki is licensed under: CC Attribution-Noncommercial-Share Alike 4.0 International