Mistakes happen, bugs are found, things work not always ideally. No problem, here's a collection of procedures to test this or that feature on a Gen7-ARM. Most of them apply to Gen7-AVR, too.

If there is a doubt that serial works, one can do a serial loopback test.

There should be no error message on connecting. 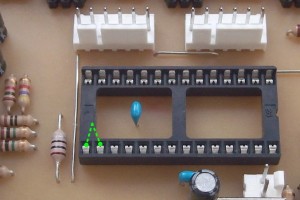 The green marker shows the pins to connect for a serial loop.

Now connect RxD and TxD, the two leftmost pins on the LPC1114 socket in the lower row, like shown in the picture to the right. A short, bent wire is just fine for this. You can do this with the PSU still on.

How this works? Well, the character is sent out over USB, converted to serial, sent on the serial transmit line, fed right back into the serial receive line by this wire bridge and then goes all the way back via serial and USB into your terminal window. If this works, serial communications works.

When trying to connect to a Gen7 with a Debian/Ubuntu system, it says this:

/dev/ttyACM0 is a serial device and as such, Modem Manager assumes it to be a connected modem and tries to establish a network connection as soon as it appears, occupying the device.

Most simple solution is to simply wait for a minute. Modem Manager gives up after a while, freeing the device.

Also a solution is to uninstall Modem Manager:

As no other package depends on Modem Manager, this works flawlessly. You loose the ability to make a network connection via a modem, of course.

The most sophisticated way is to instruct Modem Manager to try on all serial devices, but not on the Gen7. This is a bit more complicated. Googling around I found several sets of instructions, only one of them looks reasonable:

Then insert the following lines:

RepRap DIY note: this wasn't tested and the vendorIDs above need to match the Gen7. Also, doing it this way will cause a conflict next time the udev package is upgraded. As udev allows to override distribution files it'd probably be better to copy that file to /etc/udev/rules.d, which causes the one in /lib/udev/rules.d to be ignored. Then to edit the copy.

gen7_troubleshooting.txt · Last modified: 2018/05/27 16:10 (external edit)
Except where noted, content of this wiki is licensed under: CC Attribution-Noncommercial-Share Alike 4.0 International